Plan created by another user. Make it yours

Vibrant and noisy, London is one of the world’s leading cities, an international capital of culture, education, fashion, music, finance, trade, and politics.

Museum-lovers will get to explore Churchill War Rooms and Natural History Museum. Get some historical perspective at Westminster Abbey and Buckingham Palace. You'll find plenty of places to visit near London: Cotswolds Distillery (in Stourton) and Bournemouth Beach (in Bournemouth). Next up on the itinerary: explore the world behind art at National Gallery, take in the architecture and atmosphere at St. Paul's Cathedral, get engrossed in the history at The British Museum, and steep yourself in history at Tower of London.

For photos, more things to do, maps, and other tourist information, read London vacation planner.

If you are flying in from United Kingdom, the closest major aiports are London Heathrow Airport, London Gatwick Airport, London Stansted Airport, London City Airport, London Luton Airport and Southend Airport. April in London sees daily highs of °C and lows of °C at night. Wrap up your sightseeing on the 7th (Tue) early enough to take a train to Paris.
more less

Things to do in London

A beautiful and romantic city fit for any itinerary, Paris brims with historic associations and remains vastly influential in the realms of culture, art, fashion, food and design.

Louvre Museum and Musee d'Orsay will appeal to museum buffs. You'll explore the less-touristy side of things at Montmartre and Île de la Cité. When in Paris, make a side trip to see Palace of Versailles in Versailles, approximately Versailles away. There's still lots to do: contemplate the long history of Eiffel Tower, pause for some serene contemplation at Basilique du Sacre-Coeur de Montmartre, stroll the grounds of The Paris Catacombs, and appreciate the history behind Arc de Triomphe.

Use Inspirock's suggestions to plan your Paris trip and find the best activities and attractions for your vacation.

You can take a train from London to Paris in 3.5 hours. Other options are to fly; or do a combination of car and train. Traveling from London to Paris, you'll lose 1 hour due to the time zone difference. Expect a daytime high around °C in April, and nighttime lows around °C. Finish up your sightseeing early on the 12th (Sun) so you can travel to Isla de Vieques.
more less

Things to do in Paris

Palace of Versailles
Highlights from your plan

For sixty years until 2003, most of the Isla de Vieques was closed off to the public, with the US Navy using the island's beaches and surrounding waters for drills and testing of new military machinery, such as bombs.

Step out of the city life by going to La Chiva and Secret Beach (Pata Prieta). Eschew the tourist crowds and head to Caracas Beach and La Plata Beach. The adventure continues: tour the pleasant surroundings at Sun Bay Beach, glide peacefully along the water with some of the best stand-up paddleboarding in the area, and enjoy the sand and surf at Media Luna Beach.

Ask Inspirock to suggest an itinerary and make planning a trip to Isla de Vieques fast, fun, and easy.

Explore your travel options from Paris to Isla de Vieques with the Route module. The time zone difference moving from Central European Standard Time (CET) to Atlantic Standard Time (AST) is minus 5 hours. Traveling from Paris in April, things will get much warmer in Isla de Vieques: highs are around °C and lows about °C. Finish your sightseeing early on the 17th (Fri) so you can travel to Roatan.
more less

Things to do in Isla de Vieques

The largest of the Bay Islands, Roatan is the most developed and the most popular among its neighbors.

Step out of the city life by going to Little French Key and Blue Island Divers. Step off the beaten path and head to West Bay Beach and Nature & Wildlife Tours.

Before you visit Roatan, use our trip planner to discover what you can do and see there.

The Route module can help you plan travel from Isla de Vieques to Roatan. The time zone difference moving from Atlantic Standard Time (AST) to Central Standard Time (CST) is minus 2 hours. In April, daytime highs in Roatan are °C, while nighttime lows are °C. Finish up your sightseeing early on the 20th (Mon) so you can travel to New York City.
more less

Things to do in Roatan

Writer Pearl Buck once called New York City “a place apart,” and this giant urban center remains unlike any other in the world.

Get some cultural insight at The Metropolitan Museum of Art and New York Public Library. Eschew the tourist crowds and head to The Museum of Modern Art (MoMA) and American Museum of Natural History. Next up on the itinerary: take in the pleasant sights at Central Park, pause for some photo ops at Statue of Liberty National Monument, take in the architecture and atmosphere at St. Patrick's Cathedral, and take a stroll through Times Square.

To find where to stay and other tourist information, you can read our New York City online travel route planner.

Things to do in New York City 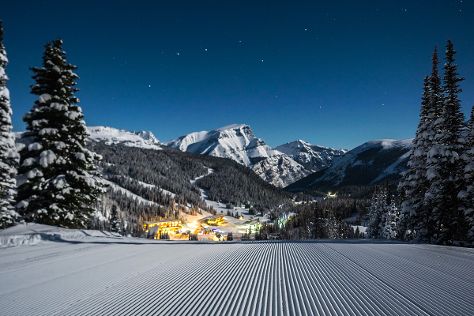 Among the world's oldest national parks, Banff National Park serves as a World Heritage-listed mecca for cyclists, hikers, skiers, bird-watchers, mountain climbers, and anyone else with a passion for exploring vast untouched wildernesses.

You'll explore the less-touristy side of things at Burgess Shale and Little Beehive Trail. Escape the urban bustle at Sunshine Village and The Lake Louise Ski Resort. Take a break from Banff National Park with a short trip to Wilcox Pass in Jasper National Park, about 2h 30 min away. There's more to do: trek along Mount Fairview and explore the striking landscape at Big Beehive.

Getting from New York City to Banff National Park by flight takes about 13.5 hours. Other options: drive; or do a combination of bus and train. The time zone difference moving from Eastern Standard Time (EST) to Mountain Standard Time (MST) is minus 2 hours. While traveling from New York City, expect little chillier days and cooler nights in Banff National Park, ranging from highs of °C to lows of °C. Wrap up your sightseeing on the 1st (Fri) early enough to travel to San Francisco.
more less

Things to do in Banff National Park

City by the Bay

Get some historical perspective at Alcatraz Island and Golden Gate Bridge. Do some cultural sightseeing at Fisherman's Wharf and Wine Tours & Tastings.

To see maps, reviews, ratings, and other tourist information, you can read our San Francisco trip itinerary builder app.

Things to do in San Francisco

Set among the picturesque peaks and glacially carved fiords of Fiordland National Park, Te Anau offers those wishing to explore the park a great place to stay and enjoy the relaxing atmosphere of a small town in an enviable location.

Visiting Milford Sound and Te Anau Bird Sanctuary will get you outdoors. You'll explore the less-touristy side of things at Doubtful Sound and The Chasm Walk. Take a break from Te Anau with a short trip to Boat Tours & Water Sports in Milford Sound, about 1 hour away. On the 9th (Sat), hike the day away at Kepler Track. On the 12th (Tue), hike the day away at Routeburn Track. It doesn't end there: trek along Hollyford Track and stroll through Lake Marian Track.

For reviews, traveler tips, where to stay, and tourist information, you can read our Te Anau day trip app.

Things to do in Te Anau 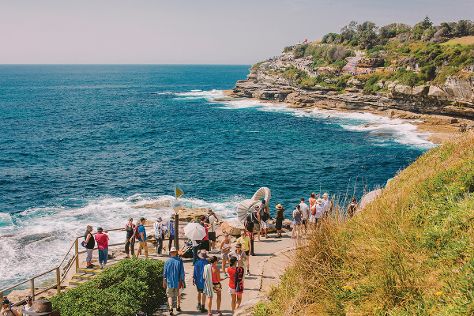 Lent iconic status as a result of its famous bridge and opera house, Sydney has a down-to-earth charm that enhances its spectacular setting and functional efficiency.

Explore hidden gems such as Bondi to Coogee Walk and The Rocks. Get in touch with nature at Manly Beach and Bondi Beach. Step out of Sydney to go to Faulconbridge and see Norman Lindsay Gallery & Museum, which is approximately 1h 20 min away. There's still lots to do: wander the streets of Darling Harbour, catch a live performance at Sydney Opera House, and examine the collection at Australian National Maritime Museum.

To see ratings, photos, reviews, and other tourist information, you can read our Sydney tour itinerary maker app.

Traveling by flight from Te Anau to Sydney takes 9.5 hours. The time zone changes from New Zealand Standard Time (NZST) to Australian Eastern Standard Time (AEST), which is usually a -2 hour difference. Expect a daytime high around °C in May, and nighttime lows around °C. Finish your sightseeing early on the 17th (Sun) so you can travel to Siem Reap.
more less

Things to do in Sydney

Once a small village in northwest Cambodia, Siem Reap now serves as a gateway to the Angkor region's World Heritage-listed temple and other attractions.

To see where to stay, maps, more things to do, and other tourist information, use the Siem Reap tour itinerary maker app.

Fly from Sydney to Siem Reap in 14 hours. The time zone difference moving from Australian Eastern Standard Time (AEST) to Indochina Time (ICT) is minus 3 hours. In May, Siem Reap is much hotter than Sydney - with highs of °C and lows of °C. Finish up your sightseeing early on the 19th (Tue) so you can travel to Cape Town.
more less

Things to do in Siem Reap

Historic Sites
Highlights from your plan

Step out of the city life by going to Boulders Beach Penguin Colony and Cape Point. There's still lots to do: hike along Platteklip Gorge, get to know the fascinating history of Maclear's Beacon, and visit Abseil Africa.

For photos, other places to visit, reviews, and other tourist information, use the Cape Town holiday website.

You can fly from Siem Reap to Cape Town in 21.5 hours. The time zone difference moving from Indochina Time to South Africa Standard Time is minus 5 hours. Expect colder temperatures when traveling from Siem Reap in May; daily highs in Cape Town reach °C and lows reach °C. Cap off your sightseeing on the 23rd (Sat) early enough to travel to Fernando de Noronha.
more less

Things to do in Cape Town 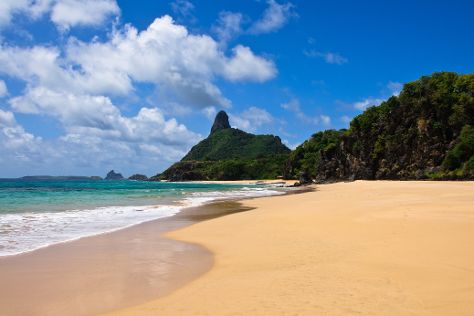 Emerald of the Atlantic

With 21 lush islands scattered among pristine waters in the Atlantic Ocean, a Fernando de Noronha holiday is well worth the effort it takes to get there.

Eschew the tourist crowds and head to Baia do Sancho and Conceicao Beach. Take a break from the city and head to Praia do Sueste and Atalaia Beach. Next up on the itinerary: get outside with Baia dos Porcos, kick back and relax at Praia do Cacimba do Padre, and tour the pleasant surroundings at Porto de Santo Antonio Beach.

To see where to stay, photos, maps, and more tourist information, use the Fernando de Noronha trip builder.

Things to do in Fernando de Noronha

©
Praia do Cacimba do Padre